Matt Lintz was able to learn to code and become a Software Engineer at 30. Read this exclusive interviews for tips on how to get an entry level software engineer job. It's never too late!

I work for a manufacturing and service company in Washington State (US).  I’ve worked at a variety of development jobs from me as the only programmer to working with people spread around the world. I dropped out of high school to work,  and assumed life would just be some sort of physical assembly line work

What was it like becoming a Software Developer at 30?

I had been playing with programming since the early 80s but when the internet came along I was working in a sawmill. I had decided to go to school for computer networking and administration hoping that might help get into programming or at least something white collar. It did help give me a large student loan. My first job was paying less and no benefits so after a few months I went back to the sawmill. Then another job came up which had better pay but still nothing great. The third job was better and that repeated until I am where I am now.

What does a typical day as a Software Developer at your company look like for you?

Most of my job is keeping a mix of integrated internal and cloud applications working. Even though I can do all of my work remotely I do like to go in and spend time with the people using the system so I can better understand their complaints so I can improve them or create new tools / apps to make their jobs easier or provide better data and insight to executives. Pay is more than I thought I’d ever get to. I think I could earn more in a larger city but I prefer a more rural life and lower cost of living. 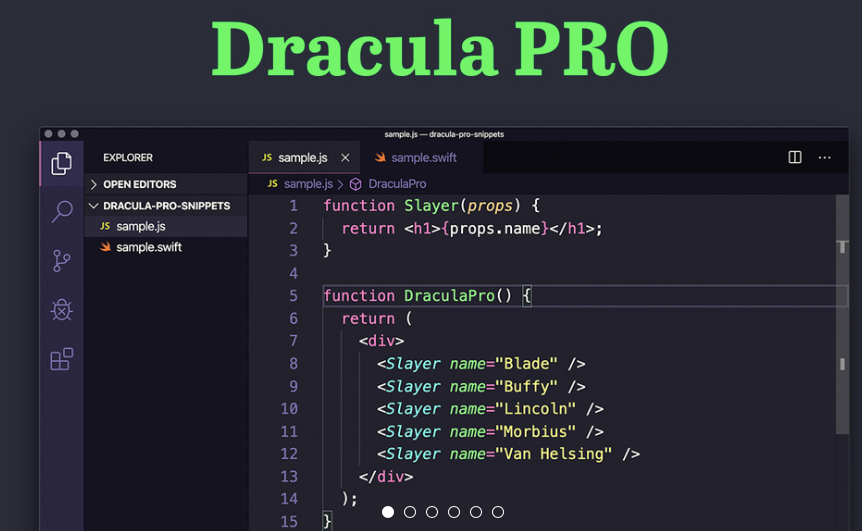 Dracula PRO is a color scheme and UI theme tailored for programming.

I had an uncle who was in college and had an Apple computer he used for word processing. I got chances to use it for programming Applesoft basic and assembly by using the manual that came with it or magazines that came with pages of code to create games. I read a lot about other languages (C,Pascal) but with no money to buy them.

My family moved around alot so I dropped out of school to go to work and it wasn’t until the late 90s that I returned to computers which now had Internet that I resumed learning development just from what was available, also now the software / compilers I couldn’t afford were free or real cheap.

How did you get your first job or freelance work as a developer?

I had done various side jobs after learning html and a little server side but I was bad at charging a proper amount so less than minimum wage. I had started school for network / computer administration and another student worked for an author that needed someone to work creating websites for each book. The pay was worse than I made in the sawmill and the checks usually bounced but I made it a few months before quitting but now could use that as experience.

What advice do you have for someone who wants to get their first programming job?

There are a lot more resources now than when I got started. If I was starting now I’d think of something I wanted to build and just to not only learn all that is involved but to learn what you like best (front / back). I’ve started and abandoned tons of side projects but I’ve been able to use what I learned on jobs or been better able to answer questions during interviews.

On a side project you are usually going to be using what you are most comfortable in using and most likely to be what you would want to use on a job. If I were to consider hiring someone a Udemy or other course might help but having a done alone project using those skills carries more weight. My first couple of years I made similar or less than I was making before and the employers sucked but getting some real world experience made it far easier to get better jobs.

Yes but less and less about programming skills and more about interacting with people and management.

There were several times in the first few years I considered giving up as I didn’t believe I would get into working at a job that paid well and I liked.

I still feel I do poorly at interviewing but in my last round I had about 10 interviews and 4 offers.

While I believe I am in my comfortable position now I am still actively studying new frameworks and languages as from past experiences I know good things can turn quickly. I would like to focus more on actually finishing a side project and learning more on marketing and management to get one of those side ideas earning and replacing the job.