In 2018 Harry Dry went viral with his Kanye West fans dating website. I interviewed Harry to find how he taught himself to code, tips for newbie coders, viral marketing campaigns and his new Marketing Examples website.

First off, you are best known for making Yeezy Dating, a Kanye West-themed dating website. Did you think that would be what you would be doing after university? What did you study again?

So I had no idea what I wanted to do after university. All I knew was that when my last exam ended I wanted to put the pen down, run for the hills and never turn back.

University wasn't for me. I "studied" Economics at Durham University in the north of England. To be honest the whole course was a sham. When you go on the open day they make you feel like you should feel privileged to be here and the course is elite level. But it's all a load of rubbish.

Pretty early on I clocked that no one gave a shit. The whole thing was a joke. I couldn’t get into it at all. So the first year I watched the entirety of Breaking Bad, played a lot of video games and ate a lot of ice cream. That’s what most students did.

When did you first write a line of code and what was your first website?

Half way through 2nd year something changed. I don’t know what exactly. I guess I just got bored of laying around. So I suddenly got really, really focused.

I had this idea that I was going to write a book. And I’d made this little video animation to accompany the book which I wanted to autoplay. But I had no idea how to make a website.

I googled a bit and came across this thing called Dreamweaver. What a mistake that turned out to be, haha! I must have spent about one year struggling with Dreamweaver oblivious to all the other text editors out there.

I used to pay this guy to do Javascript for me. And then slowly but surely I started picking it up and came up with Consumers Book.

So after that, how did you first learn to code what with not having a CS background? I seem to recall you might have used the Net Ninja Youtube series?

So originally I went on a Founders and Coders bootcamp in Nazareth. This was pretty fun, the mentors were awesome but after six weeks I had to leave because something personal came up.

Personally, I don’t think bootcamps are necessary. If you want to have a good time go for it, but just in terms of actual firepower the best teachers are on the internet.

Advice for coders with no CS degree

If I was starting again from ground zero this is what I’d do:

I think this is about 6 months work. But from here you’ll be able to play with React and Node together and from there pretty much anything is possible. I always bang on about Wesbos, but honestly doing his courses changed my stars. I can’t recommend him enough.

The Yeezy dating website really blew up online! But you hadn't actually made a dating website! How did you go about making one quickly without cacking your pants?

When you really want something to work, you'll find a way. I think this image pretty much tells you everything you need to know:

After launching Yeezy Dating you got your first developer position, is that right? Did you have to learn a lot of coding on the job then?

Yeah, so I launched the site and the whole thing crashed after about 10 minutes. Turned out I was saving people’s profile images completely wrong.

I started posting on more forums asking for help and this guy called Leo started fixing my problems.

Next thing I know he says do you want to come in and have a chat. He owned a digital product studio. So I spoke to him and his co-founder Ewan, they were cool guys and ended up hiring me.

I think making your own stuff is the best way of getting a coding job. Whilst other people show their mock portfolios or what not, you can just show them a proper working site with real users. It stands you out from the crowd massively.

I think you sold half of Yeezy Dating for 4 grand? That's a pretty great achievement for something that went viral with just a simple homepage!

Are you still working on Yeezy Dating now or is it more of a broader hip-hop dating site now?

So after the success of Yeezy Dating I got working on a bigger dating app for general hip hop fans. It was cool to make an app. And build something in React Native, but to be honest, other than that it was rough. I overworked, made a lot of mistakes and it didn't do so well.

Travelling to Berlin and going on a lovely date with a fellow Kanye fan was the highlight. I don’t see the failure of the app as a negative though. I see it as a brick in the wall. Success is my finished wall. It’s built brick by brick. 99% of all our efforts come to nothing. Everything is a training camp.

To sum up, what advice do you have for wannabe coders or people just starting out?

Coding is all about self belief.

I saw you launched the Marketing Examples website. What are your plans for that? Anything else you want to hype?

There's a nice phrase in business: “Build the product only you can build”. And that was my driving force. What can I make that no one else in the world can? Even if they tried. Even if they had money. And this is what I came up with!

I tweet marketing threads from @GoodMarketingHQ and personally from @harrydry.

And if you’ve been reading and want to know what this whole Kanye dating site was about I wrote a pretty long story about that whole episode here.

As a bonus, here's a look at what some American tv show thought of Yeezy Dating... 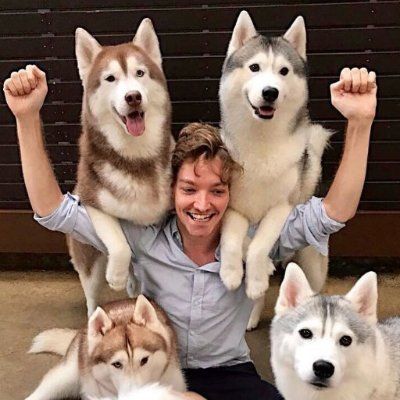 Get out of debt by learning to code